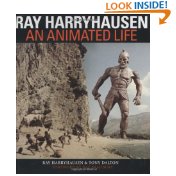 Ray Harryhausen is arguably the greatest stop-motion animator in the history of motion pictures, blazing new trails in special effects from the 1950s to the 1980s creating realistic dinosaurs, fantastic aliens, and imaginative mythological creatures. In the animator's own words, accompanied by hundreds of previously unpublished photographs, sketches, and storyboards from his personal archive, this book details Harryhausen's entire film career, from 20 Million Miles to Earth and Earth vs. The Flying Saucers to Clash of the Titans and Jason and the Argonauts. In words and images, this book explains the basics of special effects and stop-motion animation, along the way telling entertaining tales of working with the film stars of the day, such as Laurence Olivier, Maggie Smith, and Lionel Jeffries. Film buffs will relish such revelations as how Raquel Welch was picked up by a flying dinosaur in One Million Years B.C., why the octopus in Mysterious Island was really only a sixtopus, and what Medusa's blood was made from in Clash of the Titans.