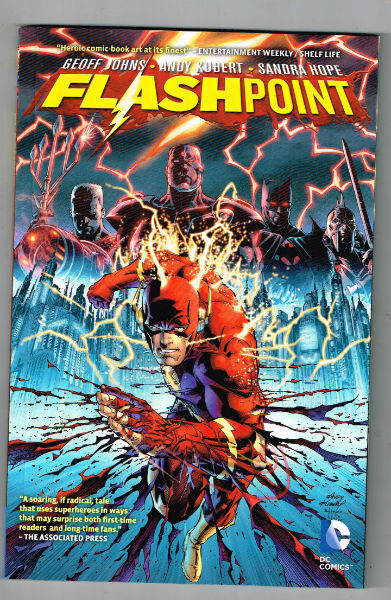 Series: Flashpoint Paperback: 176 pages Publisher: DC Comics (March 13, 2012) Language: English ISBN-10: 1401233384 ISBN-13: 978-1401233389 Product Dimensions: 6.6 x 0.3 x 10.2 inches Not a dream, not an imaginary story, not an elseworld. This is Flash Fact: When Barry Allen wakes at his desk, he discovers the world has changed. Family is alive, loved ones are strangers, and close friends are different, gone or worse. It's a world on the brink of a cataclysmic war - but where are Earth's Greatest Heroes to stop it? It's a place where America's last hope is Cyborg, who hopes to gather the forces of The Outsider, The Secret 7, S!H!A!Z!A!M!, Citizen Cold and other new and familiar-yetaltered faces! It's a world that could be running out of time, if The Flash can't find the villain who altered the time lines.Geoff Johns, a Detroit native, brings a Hollywood sense of story-telling to comics. After working as an assistant to Richard Donner (director of Lethal Weapon, Superman and many other great films), Geoff has brought his considerable writing talent to comics. For DC he has written Stars and S.T.R.I.P.E.S., The Flash, the enormously popular JSA with David Goyer, helped revitalize Hawkman with James Robinson and the comics event BLACKEST NIGHT.