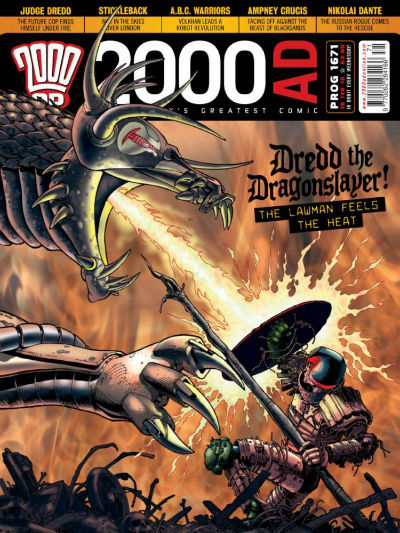 Episodes include: Judge Dredd » Dragon's Den (part 4) Mega-City One, 2130 AD. This vast urban nightmare on the east coast of post-apocalyptic North America is home to 400 million citizens, every one a potential criminal. With lawlessness rife, only the Judges can prevent total anarchy. These future lawmen are judge, jury and executioner. Toughest of them all is Judge Dredd - he is the law! Inspired by Clint Eastwood in Dirty Harry; the film poster for Death Race 2000. The name Judge Dredd came from Pat Mills who was originally going to use it for a different character. The first Judge Dredd story published was drawn by Mike McMahon, not co-creator Carlos Ezquerra. Ezquerra was so upset that he didn't draw Dredd for five years afterwards, only returning for the Apocalypse War mega-epic. Stickleback » London's Burning (part 7) London, the end of the nineteenth century. STICKLEBACK is a master criminal, pulling the strings amidst the denizens of the capital's underworld, and leads a gang of freaks, oddballs and semi-supernatural entities that have got the city under their thumb. Nikolai Dante » Hero of the Revolution (part 7) Year of the Tsar 2674 AD, and bastard son of the Romanovs NIKOLAI DANTE has bonded with a cyborganic Weapons Crest, an alien combat computer, which allows him to extrude lethal bio-blades... Ampney Crucis Investigates » The End of the Pier Show (part 7) England, 1930. Lord AMPNEY CRUCIS was one of the bright young hopes of his generation but then came the Great War, and witnessing an otherworldly sight drove him temporarily insane. Following his recovery, he found himself sensitive to the entities that exist outside of everyday reality... A.B.C. Warriors » The Volgan War Book IV (part 6) Mars, the far future. War droids created for a conflict that ended centuries ago, the A.B.C. WARRIORS are resistant to Atomic, Bacterial and Chemical warfare. Recruited to bring peace to the civil war-ravaged frontier colonies on the Red Planet, the Mek-nificent Seven comprise leader Hammerstein, the mystical Deadlock, sharpshooter Joe Pineapples, the brutish Mongrol, voice of Mars Steelhorn, the treacherous Blackblood, and the pin-headed battle-tank Mek-Quake.