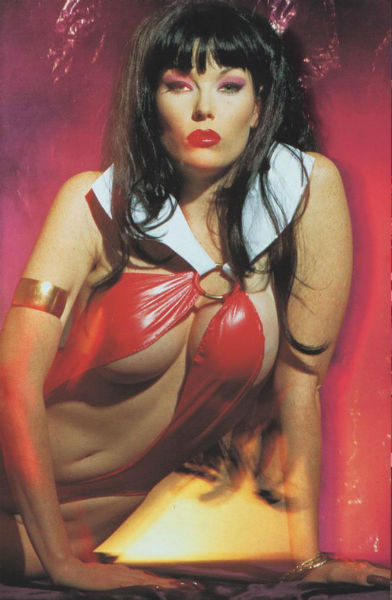 ISSUE #3 (FEBRUARY 1997) Regular Cover - J. Scott Campbell $2.95 Live Model cover - Unknown Model (3,000 copies) $2.95 Artists - Amanda Conner, Jimmy Palmiotti / Writer - Warren Ellis Vampirella Lives, Part Three The total population of Whitechapel (barring the psychic with Vampirella) is dead, their blood filling Lilith's shrine. The shrine fills with vampires watching the resurrection of the Eldest Son. The Eldest Son tells the vampires of ~Lilith's death and of the end of everything. He also knows that Vampirella is in town, and commands the vampire horde to kill Vampirella and the rest of the world as revenge for Lilith's death. Vampirella is on the streets fighting Hemorrhage, whom she defeats by using her hypnotic powers. Forcing him to stretch his powers to their limits, Hemorrhage rips all the blood out of every vampire and destroys the city - Vampirella is the only survivor. A damaged Hemorrhage returns to Mistress Nyx, who learns that Vampirella is still alive. divider The crescendo is achieved! A city wide slaughter, blood by the mega-gallon, and a new side to Vampirella that we haven't seen much of before. She is, after all, the daughter of the Ultimate Temptress, Lilith! Know we know why Vampirella is so beautiful, and it's not due to cosmetics or good luck. One irritating point, though. We never get to know much about the Eldest Son of Lilith. We don't even get to see him as a fully revived "person" or learn his name ... Oh well, just another of life's mysteries .