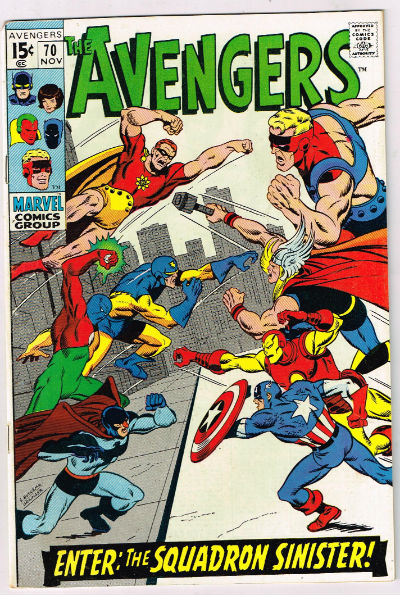 from comicvine; " The Avengers battle a super-powered team in the year 4000 AD. In Egypt, Thor battles a “hero” named Hyperion who comes from Micro-World. Continuing from last issue...in the year 4000 A.D. the Avengers and Kang await the arrival of a fourth Avenger to aid their comrades Captain America, Thor, and Goliath in their battle against the Squadron Sinister. Kang's men attempt to assassinate the Grandmaster, but to no avail. While in the present, Cap and the others are joined by Iron Man who has been summoned to be the fourth member of their team. Upon his arrival, the Avengers are told by the Grandmaster each of the Squadron Sinister members abilities before transporting them to different parts of the world. Grandmaster then explains that his minions are attempting to capture four national monuments: The Statue of Liberty, The Taj Mahal, Big Ben, and the Sphinx. Thor then uses his hammer to transport each Avenger to each of the monuments. At the Statue of Liberty, Captain America battles against Nighthawk, and manages to stop the villain from stealing the statue with his Hawk-plane. In India, Iron Man battles Dr. Spectrum for the Taj Mahal. At first Dr. Spectrum has the upper hand, but Iron Man eventually defeats him. In Egypt, Thor battles against Hyperion, who explains that he comes from a Micro-World which was destroyed when the first atom was split by Earth scientists. Thor manages to defeat Hyperion by using his enchanted hammer to shrink Hyperion in size and trap him a sphere of glass. In England, Goliath runs into Black Knight before tacking on the Whizzer, Goliath tells Black Knight to not get involved, however the Black Knight interferes. This causes the Grandmaster to abruptly end the first phase of the contest, and whisk the combatants away for the second part, leaving the Black Knight behind to vows to help the Avengers."