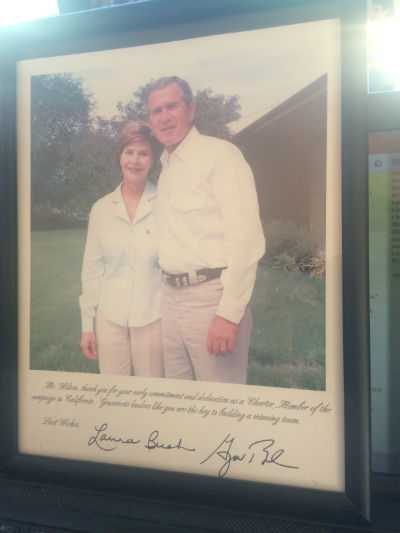 By: George and Laura Bush

This rabbit-brained idiot brought our nation to the brink of Chaos and destruction. and that my friends is a flyingelfbooks.com fact.Pure Evil.Here is a commentary i found to unite George's policies with Adolph Hitler:".....Former Soviet leader Mikhail Gorbachev, who did more to bring peace to the world in a couple of years than either of the Bush’s have done in two presidential terms, said last year that George W. Bush is a threat to world peace and that his plans to attack Iraq will destroy the international coalition in the war on terrorism. Former President Jimmy Carter and Nobel Peace Prize laureate warned that a pre-emptive US attack on Iraq would have catastrophic consequences. Bush’s disparaging of the United Nations, world opinion, and international statesmen is reminiscent of an April 28, 1939 speech by Hitler before the Reichstag: “Members of the German Reichstag: The President of the United States of America has addressed a telegram to me, with the curious contents of which you are already familiar . . . The President of the United States believes that in conference rooms as in courts it is necessary that both sides enter in good faith, assuming that substantial justice will accrue to both. German representatives will never again enter a conference that is for them a tribunal . . . Mr. Roosevelt asks that assurances be given him that the German armed forces will not attack, and above all, not invade, the territory or possessions of the following independent nations. He then names as those to which he refers: Finland, Lithuania, Latvia,’ Estonia, Norway, Sweden, Denmark, the Netherlands, Belgium, Great Britain , Ireland, France, Portugal, Spain, Switzerland, Liechtenstein, Luxembourg, Poland, Hungary, Rumania, Yugoslavia, Russia, Bulgaria, Turkey, Iraq, the Arabias, Syria, Palestine, Egypt and Iran. I have first taken the trouble to ascertain from the states mentioned, firstly, whether they feel themselves threatened, and, what is most important, secondly, whether this inquiry by the American President was addressed to us at their suggestion or at least with their consent. The reply was in all cases negative, in some instances strongly so . . . I have reunited the territories that have been German throughout a thousand years of history-and, Mr. Roosevelt, I have endeavored to attain all this without bloodshed and without bringing to my people and so to others, the misery of war . . . For my world, Mr. President, is the one to which Providence has assigned me and for which it is my duty to work. Its area is much smaller. It comprises my people alone. But I believe I can thus best serve that which is in the hearts of all of us a*” justice, well-being, progress and peace for the whole community of mankind.” As Congress cheerfully applauded Bush’s State of the Union address, the Reichstag gave Hitler a thunderous reception. Although Hitler’s oratory skills were light years beyond Bush’s, the two speeches had something extremely fundamental in common– they were packed with lies." WAYNE MADSEN is a Washington, DC-based investigative journalist and columnist. He wrote the introduction to Forbidden Truth. Madsen can be reached at: [email protected]